In the several years since I've gotten off pills, but not entirely sober either, I've seemingly lost all connection to creativity. Reading, which I usually did all the time, has become harder to do, mostly with a lack of focus. I'm not sure what the hell is going on there...

But with all the fiction that I still do read and envelope myself with has been prying open that shuttered part of my brain that used to design worlds and characters, and begged me to step back into that world of creativity again. It's been soo long. Too long? I don't know. I started writing another story the other day when I should have been working, and four or five pages just flowed from my fingertips. That felt good, don'cha know! I'm wondering if I can do this again, or is this a fleeting phase and I'll give it all up at the first chance to look at something shiny and new, or take a nap and forget all about it.

All I know is that I love it when the vampires keep me up at night.
Posted by Elton A.R. Alwine at 11:20 AM

I don't know if I'll keep this journal any longer. I have given up writing about Evander, Tammie, and his vampire nightmare. The angels, vampires, werewolves, magicians and the supernatural world of UNIQUE has left me feeling a bit of a failure, and I haven't even attempted to edit the story or pursue publication for months now. There came a point when I looked back and realized I really was not the writer I had thought I was. I am not talented. I cannot create a deep universe based on gothic demons and it weighed heavily on my soul. After all, that's what I put into this story. But the story was never complete, going in any which direction with the change of my mood, and there was simply no direction most of the time. I look back now and wonder if I was in so much of an painkiller haze that I actually thought what I was writing was any good.

I truly feel like I am leaving something to rot, to fester in my imagination like mold through bread. And I am completely heartbroken. Perhaps I had just invested to much emotionally into THE UNIQUE DESTRUCTION OF AN ORDINARY SOUL and it was never going to be good enough...
Posted by Elton A.R. Alwine at 8:30 PM

For the past three days I've been celebrating. The Baltimore Ravens are Superbowl XLVII Champions and I have been blissful since 11pm Sunday night. We, my nephew and I, waited in the cold city for four hours yesterday for the Ravens parade, and it was worth all of the potential frostbite! Coach Harbaugh actually said "I love you, too," to me, and I nearly fainted like a school girl! This was also Ray Lewis's last ride, and I'll be honest, I got extremely emotional. I haven't been able to read or write since the big game. I'm just overcome with happiness! It may be weeks before things get back to normal in Baltimore...
Posted by Elton A.R. Alwine at 10:30 AM

Well it's Superbowl Sunday. My Baltimore Ravens. The City of Baltimore on edge, excited, and I'm high on two cups of Caramel macchiato. This is not just a game, no matter what my girlfriend keeps telling me. This is the height of civic pride. And I find it hard to explain what it means to be so fervent about a team to her. She should know by now that those are hurtful words after our seven+ years together. Orioles baseball and Ravens football mean the world to me.

And today will monumental, one way or the other. I literally prayed last night for a win. I just can't take a loss. I'll be back later tonight to let you know what I'm feeling...

So this is what happens when you miss the opportunity of a lifetime...?

No job, for over a year; ample opportunity to workout at the gym;  had the time to write, write, and write some more, but what do I do?

Sulk. Lay in deep depression most of the time. It's unbelievable what depression is capable of on the human psyche. I finally got what I always wanted: the chance to stay at home and write, and get paid mildly for it, and I blow it! But alas I'm only human. And I can't do anything about the past.

But the past year wasn't all that bad, really! My Baltimore Orioles broke the curse of 14 successive losing seasons and went to the playoffs; they were one game away from a Championship game. I got to visit Fenway Park and watch the Orioles beat the Sox--how great is that?!--I waited a lifetime, it seems, for this to happen. The 2nd annual Grand Prix of Baltimore came and went, with some rain, and I'm looking forward to the 3rd race. Star-Spangled Sailabration brought tall ships to our harbor and Blue Angels to the skies over Baltimore! My girlfriend and I saw Dave Matthews Band twice and finally in Baltimore, which I've waited for forever... Went to Disneyworld. And now my Baltimore Ravens are in the AFC Championship after stumbling in the entire latter half of the season. We're one game away from Superbowl XLVII. My dog and I have spent every day together and I love the lil sonofabitch.

And recently I've been having a great time writing Blood and Argyle, a new sequel to UNIQUE. Instead of destroying the world at the end of the first book I decided it should take a little longer, maybe a trilogy of books before I set into motion the next era for the protagonist. I'm enjoying writing again.

A New Life in New Orleans

Here's a basic synopsis for the query of my childrens book:

Count Dracula leaves behind the foggy woodland hills of Transylvania for the humid narrow streets of New Orleans. His wife Caramella has been seemingly abducted by his arch nemesis, the French nobleman Le'snot, who has whisked her away to New Orleans to be married on Halloween. Le'snot's friend, Edvard, is brooding and glittering (he's bitter that his fangs will not develop) and agrees to help Le'snot when he falls in love with a beignet waitress named Cookie at Cafe Du Monde.

And finally there is the small brown wolf-like puppy Wolfie who is burdened with a particular affliction for turning into a human boy during the full moon. It's his curse to bear, and while in human-boy form for those three days he searches old books on ways to destroy the human curse, not immediately seeing the hypocrisy of his quest.

Dracula and his son Devon arrive in New Orleans at a pier in front of Jackson Square, with St Louis Cathedral looming in the background, and immediately search for Le'snot. They hire the help of local vampire experts to seek him out. The father and son, along with Wolfie, are whisked out of the French Quarter and head for the oak-lined streets of the Garden District via the St Charles streetcar line and head to 1st St [formerly Anne Rice's home] to the corner house Le'snot calls home.

During the quest to find his mother Devon is constantly trying to kill other vampires, including his father, with tiny sharp wooden stakes, but is thwarted inadvertently and humorously throughout. Either Wolfie will catch one sailing in the air trying to play fetch or he will hit a bat swirling around the Count instead, ending in a wisp of smoke. The stakes never quite reach their intended targets... Devon has grown angry since his mom left and he blames his father for caring more about growing the "Count Dracula brand" around the world than keeping his momma happy. The misinformed Count tries informs his son that his mother did not leave--she was kidnapped by the despot Le’snot--Of course she would never leave them deliberately. But it is the Count who is wrong.

But when Devon and the Count are attacked by a father-daughter vampire hunting duo, the imfamous Blake and Bunny, the little would be vampire hunter abates his contempt for his kind. And when his father helps save him, the moment helps to bond Devon with his father again as they fight their way back against the vampire slayers.
Posted by Elton A.R. Alwine at 12:56 PM

Happy Halloween, dear blog. Hurricane Sandy is on her way and the flooding has begun around here. Wind gusts are extreme, too.

I began a strong edit of Unique. From over 140,000 words I'm working near to 100,000 words for a much more single direction. I hope to postpone the apocalyptic ending for another story so to keep the plot and setting in present day for the time being. I like it in Baltimore. I'll blow it up later.

The book 2 story is still in the works as I really like the story of Evan waking from a coffin in the earth a decade or so into this new world inhabited by tall, dark castles and vampire technology and mutants and a much quieter planet. 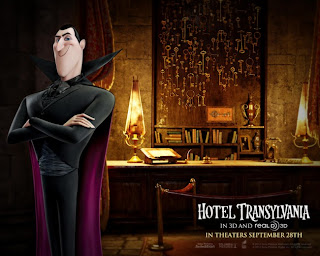 Saw Hotel Transylvania with my girlfriend and nephew over the weekend. Really cute flick, but eerily reminded me of my failures to get my vampire children's book (A New Life in New Orleans) done. Oh what could've been...
Posted by Elton A.R. Alwine at 12:52 PM

During this past year I've learned a lot about myself, and forgot a lot, as well. During this past year I reckon I could've had polished my book and had it published, twice. Instead, I burrowed deep into my depression, snuggled into it, cried that I wanted to find a way out of it, but like the barb of a cactus, the more you pull the deeper it sets.

Today I started writing again, added a nice new piece to the first book and I have two pages in what is now the definite book 2. As the original book 2 became a piece for much later in the series.

The Displaced Vampire all but forgotten. 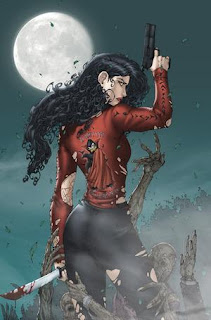 I know this is a bit late, but it's Halloween once again, the time for ghosts, ghouls and other nasties, but more specifically it's a time of vampires. And this year, let's celebrate the vampire hunters, the slayers of the undead Children of the Night in film and television and literature. And considering I've recently attened the Theater of the Vampires Ball in New Orleans with special guest Laurell K Hamilton, let's celebrate her very own slayer: Anita Blake, Vampire Hunter.

I've just finished reading the fifth book in her very long running series, Bloody Bones, and honestly I was hooked again. Serephina, the town's master vampire, is described so beautifully and wonderfully spooky that the book's weaknesses disappeared for me completely. Reading a captivating chapter like that is the kind of stuff that inspires me most to continue to write, even when I'm in hopeless despair. But Anita Blake is a richly deep and complex character, and after hearing Laurell at the ball, it's easy to understand where this character has come from.

Well Halloween is officially over by now, but I'm already looking forward to the next Coven Ball in New Orleans, and catching up with the Anita Blake series... Oh, and special shout out to those wonderful folks that made the Theater of the Vampires ball the success it was. Without them, we vampire/Lestat/Anne Rice fans would have nowhere to go once a year and celebrate our love of the undead. So thank you very much.
Posted by Elton A.R. Alwine at 12:27 PM

Elton A.R. Alwine
Baltimore, United States
Vampires are still keeping me up at night, but so are other things, like Salted Caramel Mocha coffees and pain.